Almost all of Israel’s ecosystems are losing their biological diversity, the state comptroller said in a report released Tuesday on preventing damage from invasive species and protecting biodiversity.

“About 89% of ecosystems in Israel have declined in terms of biodiversity,” the report said.

He also said the state does not have a strategic action plan to deal with the decline; does not have a blacklist of species potentially harmful to biodiversity and should not be allowed in the country; performs only partial border checks on incoming cargo and goods that may harbor potentially destructive insects; and has made “insufficient progress” towards meeting 14 of the 19 targets it has committed to under the International Convention on Biological Diversity.

The release of the report coincided with a battle being waged between the environmental community and Environmental Protection Minister Tamar Zandberg over a private member’s bill that aims to commit the department not just to implementing convention in its entirety, but to take legal responsibility for monitoring the state of nature and reporting regularly to the Knesset on species in decline.

Biodiversity refers to the biological diversity of life on Earth. This variety exists within different communities, or ecosystems, in habitats such as forests, grasslands, deserts, and oceans.

Healthy ecosystems provide “services” such as crop pollination (by insects, birds and mammals), clean air and clean water, a balanced climate, and protection against flooding and erosion. (Vegetation binds the ground and everything from mangroves to wetlands helps prevent flooding).

The value of biodiversity for the health and well-being of the Israeli population has been estimated at 122 billion shekels ($35.2 billion) per year, according to the report.

The country’s ecosystems are not only threatened by population growth and increasing urban development, but also by foreign wildlife entering Israel, adapting to local conditions and threatening native species.

The common myna, an alien species that has become invasive in Israel. (Richard Taylor, CC BY 2.0, Wikimedia Commons)

These range from birds that were imported as pets and have since entered the wild, reproduced rapidly and out-compete local species, to fish that have escaped from aquariums and wood-eating insects, such as the highly destructive Formosan termite.

“Over many years, hundreds and even more invasive species have established themselves in Israel, causing harm to humans and the environment, including economic damage,” the report said.

He noted that 452 marine invasive species have been identified near Israel’s shores and 114 nurseries were infected with the fire ant, as of August 2021.

The fire ant, listed by the International Union for Conservation of Nature as one of the 100 invasive alien species that pose the greatest threat to the environment and biodiversity, was first discovered in Israel in 2005 and s has since spread across the country. The Ministry of Environmental Protection learned in May 2019 that the Formosan termite was present in the country, the report continues, but did not start dealing with the problem until September 2020, so the insect is now well established in 10 localities.

The Society for the Protection of Nature in Israel said in response to the report that it had “warned for a decade about the lack of a budgeted national program to protect biodiversity.” He noted that he warned the ministry in 2016 about the possibility of a Formosan termite invasion.

In 2016, she and the government’s Israel Nature and Parks Authority submitted a detailed proposal to combat invasive species and protect biodiversity.

In 2017, veteran environmental activist Professor Alon Tal, now a member of Knesset, and University of Haifa zoologist Professor Uri Shanas co-drafted a state of the art bill. nature and biodiversity. 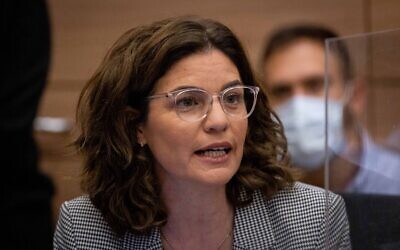 In March, a series of environmental organizations sent a letter to Zandberg imploring him to implement the bill, which has already passed its preliminary reading in the Knesset.

But the bill is stuck on the issue of responsibility to monitor and report on the state of nature.

Zandberg wants the bill to secure funding and the continued right of Maarag — Israel’s National Ecosystem Assessment Program — to produce annual reports, as it has done since 2006, for at least three years.

Maarag is based at Tel Aviv University’s Steinhardt Museum of Natural History and has no legal status.

Tal, Shanas, environmental organizations and even the legal adviser to the Knesset’s Internal Affairs and Environment Committee counter that an open tender must be held regularly if monitoring and reporting is to be conducted by a outside body so that other academic institutions can also bid. They say guaranteeing employment to an organization in law is neither appropriate nor legal.

They want the department to take overall responsibility for monitoring to force it to act on the results. 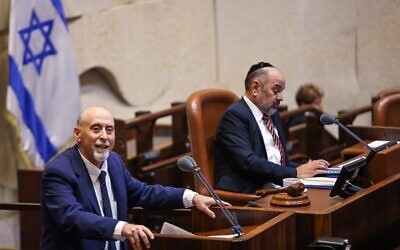 Blue and White MK Alon Tal at the Knesset on June 30, 2021. (Noam Moskowitz/Knesset)

According to Shanas, the fact that Maarag is co-financed by the organizations responsible for the protection of biodiversity limits their freedom of criticism. The funders are the Ministry of Environmental Protection, the Israel Nature and Parks Authority, the Jewish National Fund KKL-JNF and the Steinhardt Museum.

Tal, a Blue and White lawmaker, told The Times of Israel that he changed the wording of the bill three times over the years to win support from the scientific and environmental community. Ministry professionals supported the bill, and Zandberg herself originally promised to move it forward, he said.

“I am baffled by the turn of events,” he continued. “Everyone around me tells me it’s political.”

You are a dedicated reader

We’re really glad you read X Articles from The Times of Israel over the past month.

That’s why we started The Times of Israel ten years ago – to provide discerning readers like you with must-read coverage of Israel and the Jewish world.

So now we have a request. Unlike other media, we don’t have a paywall in place. But since the journalism we do is expensive, we invite readers to whom The Times of Israel has become important to support our work by joining The Times of Israel community.

For just $6 a month, you can help support our quality journalism while benefiting from The Times of Israel WITHOUT ADVERTISINGas well as access Exclusive Content only available to members of the Times of Israel community.

Thanks,
David Horovitz, founding editor of The Times of Israel