Every year, humans around the world produce billions of tons of solid waste. About 70% of this waste ends up being deposited in landfills, where it slowly decomposes. Yet what may seem like an inert accumulation of useless debris is actually a complex ecosystem, teeming with microbial activity. Large communities of microorganisms feed on waste and turn it into by-products — mainly carbon dioxide (CO2) and methane.

While most methane from landfills is captured and burned or burnt, researchers hope to tap into this resource instead, which can be converted into fuel, electricity or used to heat homes (see below).

In a new study published in the journal Applied and Environmental Microbiology, lead author Mark Reynolds, along with his Arizona State University and industrial colleagues, explore these thriving microbial communities in leachate, a liquid percolating through solid waste in a dump. They find that the composition and behavior of specific microbes found in arid landfills, such as those in Arizona, are distinct from similar communities in more subtropical or temperate climates. The microbial composition also differs depending on the age of the discharge deposits.

The project was carried out at the Salt River landfill located in Scottsdale, Arizona, near ASU’s Tempe campus. The facility receives approximately 1,600 tonnes of municipal solid waste per day.

The study explores ecosystem-level microbial composition in leachate. Various environmental conditions apparently affect the microbial niches that are compartmentalized across the landfill’s 143 acres.

“I think of a landfill as a big carbon buffet for these microorganisms,” says Reynolds, a researcher at the Biodesign Swette Center for Environmental Biotechnology. “Our waste is mainly composed of paper and very rich in cellulose and hemicellulose. These are readily degradable under anaerobic conditions (without oxygen).

By better understanding the behavior of these methane-producing microorganisms, researchers hope to improve the capture of this vital resource and possibly limit the escape of methane and CO2 — two powerful greenhouse gases and main contributors to climate change — in the atmosphere.

“We’re diving into ecological theory to try to find the source of what might be driving the organizational patterns of methane-producing organisms,” Reynolds says. The multidimensional analysis of the study indicates that temperature and dissolved solids are the two key parameters governing their abundance and diversification. That’s good news, because this data is routinely captured at landfills, usually on a monthly basis, and can provide accurate diagnostics — tell-tale indicators of broad trends in overall methane production. 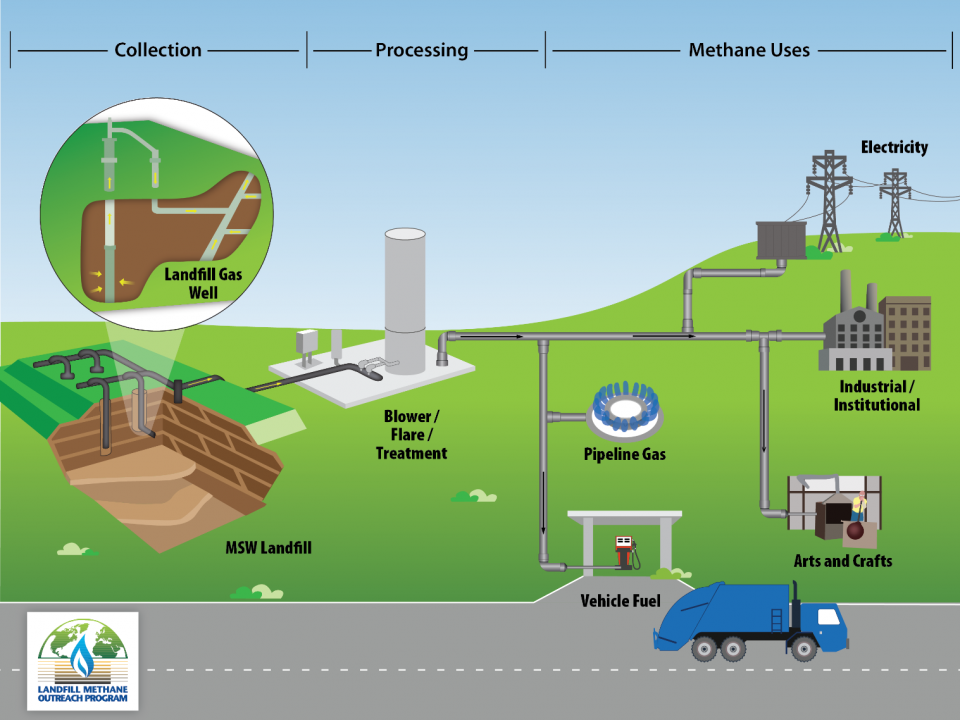 This graphic illustrates the collection and processing of landfill gas (LFG) to produce multipurpose methane. First, landfill gas is collected by vertical and horizontal pipes buried in a municipal solid waste landfill. The LFG is then processed and processed for use. The graph shows the potential end uses of landfill gas, including industrial/institutional uses, arts and crafts, gas pipeline, and vehicle fuel. Graphic courtesy of the Environmental Protection Agency

From garbage to fuel

Typically, most of the methane released by microorganisms in a landfill is captured as biogas and then burned, converting it to CO2. Although this method limits the adverse climate effects of methane itself, it is a short-term and inadequate solution to the problem of greenhouse gas emissions from landfills.

In addition to its detrimental effect on the climate, the lost methane represents a missed opportunity to capture this precious resource. The study estimates that about one-fifth of the country’s landfills would be suitable for this type of capture and treatment, if economic and other barriers could be overcome.

The increased methane can be harvested and used to create electricity and carbon-neutral fuels or to heat homes. This last option is particularly attractive because no further treatment of the methane would be necessary. Alternatively, altering microbial communities could potentially be used to limit methane production, where mitigation is desired. 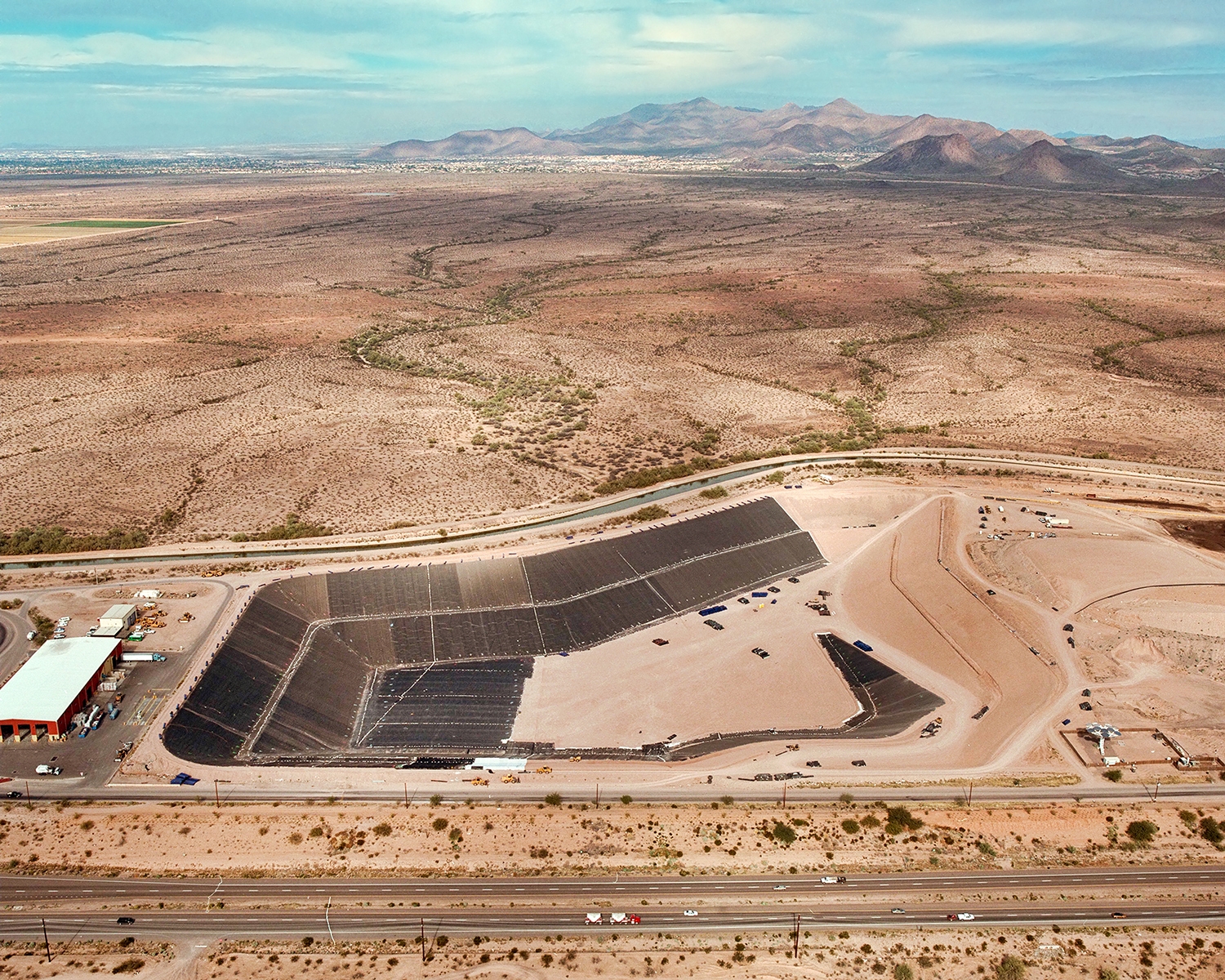 Aerial view of the landfill described in the new study. Photo courtesy of Tim Roberts Photography

In search of Archaea

Landfills provide an ideal setting for the detailed study of Archaea, which are notoriously difficult to grow in the laboratory. About 80% of Archaea diversity remains largely unexplored.

“Our labs are really interested in methanogens because the same metabolism they adopt in wetlands, which makes them the biggest source of methane, or rather the human gastrointestinal tract, they act in landfills,” explains Reynolds.

Because methanogens are primitive single-celled organisms, they can also use plant or food materials or paper products. While the study found similar methane concentrations at their arid landfill compared to other landfills, different communities of methanogens do the heavy lifting. The study demonstrates that microbial behavior also depends on the age of the solid waste deposited. Younger waste is hotter than older waste and degrades according to different regimes. Aridity has also been shown to significantly affect solid waste decomposition over time.

“There’s a restructuring or reorganization of these arid climate microbes in landfills,” Reynolds says.

Future research will aim to clarify the distinctions of these communities from their temperate and humid counterparts. It will further explore the microbial communities of landfills as well as the use of biostimulants or other techniques that could be used to alter methane production.