A climate activist who died after setting himself on fire outside the Supreme Court on Earth Day is a Buddhist who hinted at his future self-immolation with a fire emoji under a Facebook post from 2020.

Wynn Bruce, 50, of Boulder, Colorado, set himself on fire in the court square around 6:30 p.m. Friday.

He suffered severe burns and was pronounced dead on Saturday at a local hospital.

On October 30, 2020, he shared a link to an online course on climate change offered by edX, a free online course platform created by Harvard and MIT.

Surveillance footage of the immediate aftermath of the fire shows police as they try to calm Bruce, who can be heard screaming in the background.

Police are still investigating a motive, but a Boulder Buddhist priest took to Twitter to clarify that Bruce’s death was not a suicide, but a “deeply fearless act of compassion”.

Scroll down for video

Wynn Bruce, 50, of Boulder, Colorado, set himself on fire outside the Supreme Court Friday afternoon on Earth Day 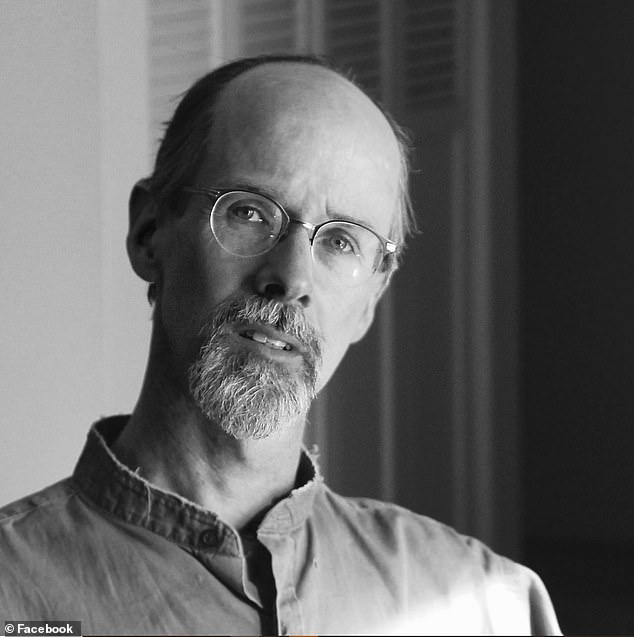 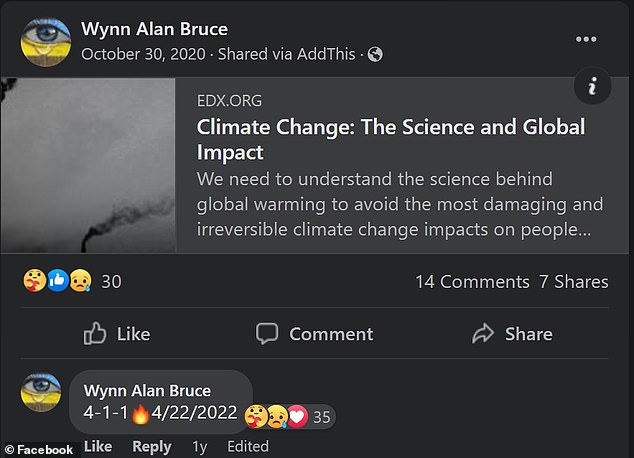 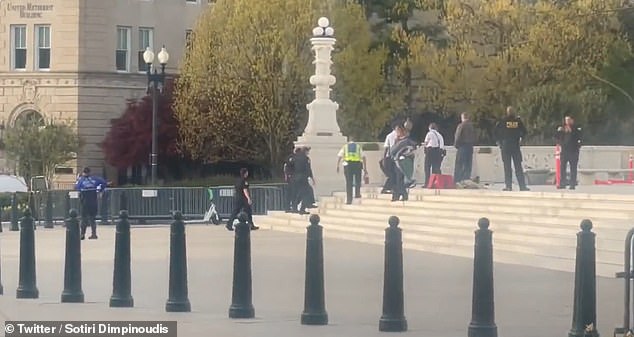 Video of the immediate aftermath from Friday shows officers as they try to calm Bruce, who can be heard screaming in the background 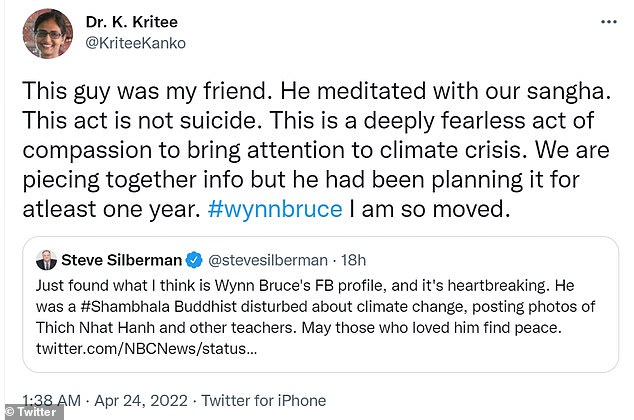 Buddhist priest Sensei Kritee Kanko, who calls himself a ‘friend’ of Bruce, said his death was a ‘fearless act of compassion to bring attention to the climate crisis’

“This guy was my friend. He meditated with our sangha. This act is not suicide,” said Zen priest Sensei Kritee Kanko.

‘This is a deeply fearless act of compassion to bring attention to the climate crisis. We’re gathering information, but he’s been planning it for at least a year. #wynnbruce I’m so moved.’

Bruce’s Facebook page has since been inundated with comments praising his actions and criticizing his way of bringing attention to his cause.

“How can you solve the climate crisis when you leave in the middle of the fight. Now there is nothing you can do to be helpful,” one person commented.

Another wrote: “I see he was a fighter for his beliefs and that may have contributed to this tragedy.”

Supreme Court Police, Capitol Police and DC Police all responded to the incident.

“A medical helicopter landed in the square and the individual was airlifted to a local hospital.

#Rupture: Just in – Video of police at the scene near the Supreme Court building in Washington #DCshowing you and hearing the cries of a person screaming in pain after setting themselves on fire and after the fire was extinguished by police officers. #WE pic.twitter.com/Xpkee02BC7 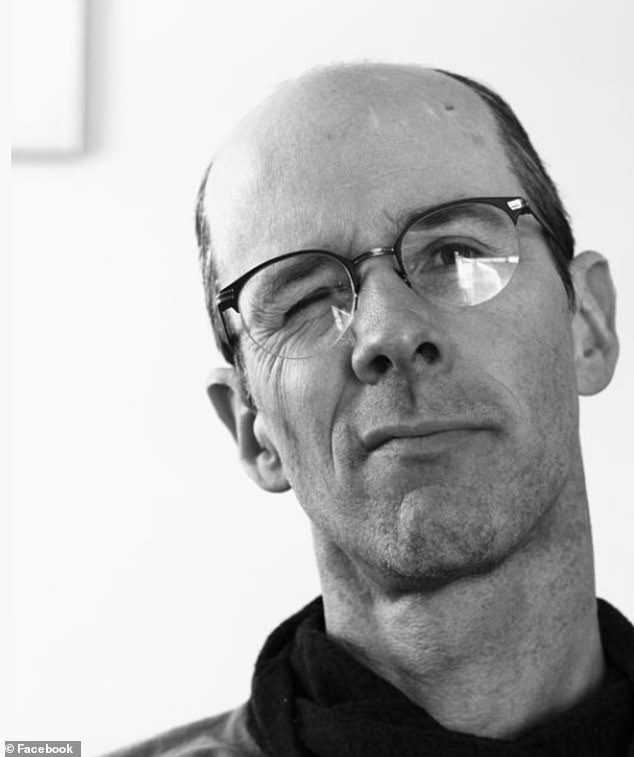 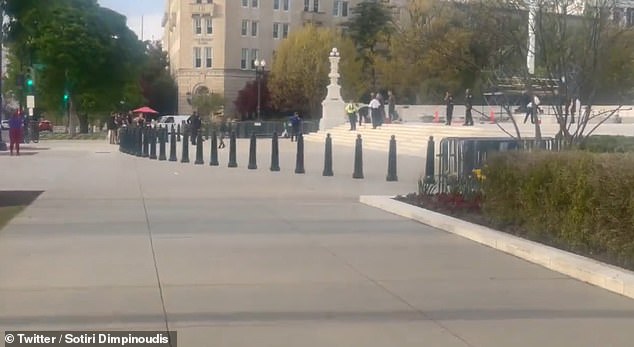 Emergency personnel tend to Wynn Bruce, who had just set himself on fire outside the Supreme Court building on Friday 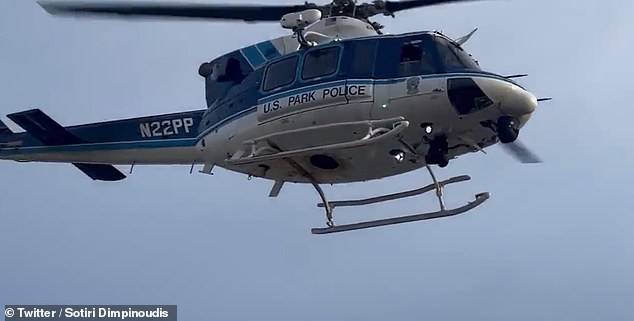 Pictured: The helicopter as it lands to ferry Bruce from the square in front of the Supreme Court building

No one else was injured,’ court spokeswoman Patricia McCabe said in a statement.

Authorities had to temporarily close two roads while the EMS helicopter crew dealt with the medical emergency.

Although she confirmed the 252ft oval plaza had been closed to allow for an investigation, she said the incident was “not a public safety concern”.

The square itself is a short walk from the sidewalk outside the court building.

In May 2019, disturbing footage emerged of another man setting himself on fire and walking calmly near the White House as police desperately tried to douse the flames.

The man, later identified as Arnav Gupta, set himself on fire in Ellipse Park in downtown Washington, DC.

The 33-year-old died of his injuries the following day. He had previously been reported missing by police, who said they were “concerned for Gupta’s physical and emotional well-being,” according to CNBC.

In May 2019, another man set himself on fire near the White House, with terrifying footage showing him engulfed in flames

Video of the incident showed the man walking calmly on the Ellipse near the Washington Mall, an area popular with tourists, with flames covering his body.

Seconds later, US Secret Service personnel could be seen heading towards him with a fire extinguisher to put out the fire.

It happened less than a mile from the White House.

Just days before Friday’s incident, Capitol police evacuated area courthouses and congressional buildings after an unidentified plane was spotted seconds from the US Capitol on Wednesday.

It was ultimately determined that the single-engine aircraft was on a Golden Knights Parachute Team flight for Military Appreciation Night at Nationals Park.