Parts of the UK are set to have a ‘very hot’ bank holiday next weekend as the weather heats up again.

Over the past week, some have expressed relief as temperatures have cooled following the prolonged heat wave that many regions experienced in late July and early August.

This was after the UK earlier saw record high temperatures which resulted in wildfires break out, train lines warp and tarmac melts.

But with UK public holidays notorious for poor conditions, there will be plenty of people hoping for good weather as they try to enjoy their last national break before Christmas towards the end of the year.

And forecasters say the odds are good, with the mercury expected to rise further.

“The next few days will be choppy. Temperatures will be near normal in the North but hot and humid in the South.

“High pressure begins to build on Thursday with the promise of more stable conditions for the bank holiday weekend. However, complications at higher altitudes mean showers/rain cannot be ruled out – and would most likely be in the south and north -west.

“It looks like it will get warm or possibly very hot in the southeast, but not the kind of conditions to rival the recent heat wave.”

Sewage gushes into the sea

The Met Office said there would likely be a north-west-south-east distribution of the weather, with cooler conditions likely in the north-west of the UK.

Its long-term forecast for the period covering the bank holiday weekend, Thursday August 25 to Saturday September 3, said: “After a volatile week, stable conditions are expected to spread across the UK during this period, bringing weather nice and dry in most places.

“Stronger winds and a few showers are likely in the north and northwest, and further thundery showers are also possible in the south and southeast early in the period.

“A northwest/southeast temperature pattern may also develop, where cooler air will characterize the north, with the south becoming very warm and possibly humid. 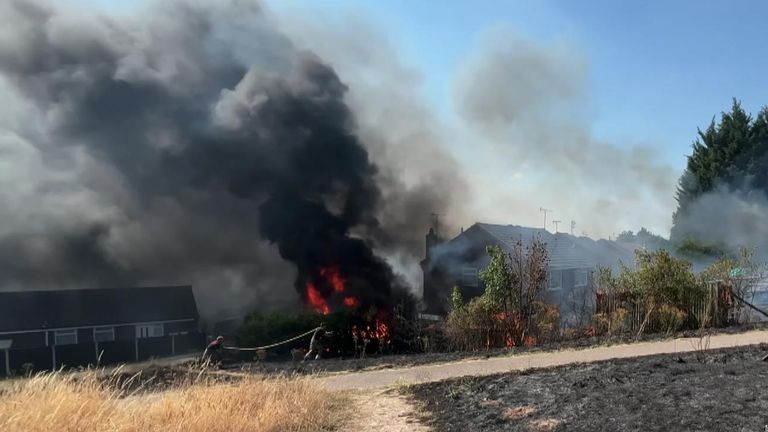 The return of dry weather will do nothing to relieve impending water restrictions, with Thames water and Yorkshire Water are both due to implement watering bans this week.

Read more: Garden hose bans – What are the rules, what are the exemptions and what do they mean?

On Friday, Yorkshire Water thanked its customers for reducing their demand for water before the ban, and as Natural Resources Wales (NRW) pushed south-west Wales into a drought.

Martyn Hattersley, demand management manager at Yorkshire Water, said: “Yorkshire is officially in a drought… our reservoirs are low, less than 50 per cent full.

“A heartfelt thank you to our customers for their wise use of water. By reducing the amount of water used, we can help keep as much water in the reservoirs as possible.”